SCOUT OF THE YEAR SCHOLARSHIP 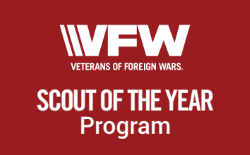 Some of the Veterans of Foreign Wars (VFW) earliest ties to the community involve youth groups and perhaps none are stronger or more lasting than the relationship between the VFW and America's scouting organizations.

Annually, the Veterans of Foreign Wars of the United States awards three individuals who are: Eagle Scouts, Girl Scout Gold Award recipients, Venture Summit Award recipients and/or Sea Scout Quartermasters who have risen above their peers in exemplifying the qualities of that rank.

Scouts who are registered, active members of a Boy Scout Troop, Venturing Crew, or a Sea Scout Ship who have received the Eagle Scout Award, Venture Silver Award or Sea Scout Quartermaster Award.
Scouts must have demonstrated practical citizenship in school, scouting and the community.
Scouts must be enrolled in high school at the time of selection (applicants still in high school who reach their 18th birthday during the nomination year remain eligible if otherwise qualified)

How the contest works: Local VFW Posts select one winner from the entries received. Posts then submit their local winner to their respective VFW Department (state) by April 1. From there, the Department selects a winner and forwards the entry to the VFW National Headquarters by May 1 for national-level judging. Colorado department winners are recognized at the State VFW Convention, in 2017 the State VFW Convention.

Deadline: Submit nomination to a local VFW Post by March 1st.
Eligibility and Rules and Entry Form are available under Attachments below